Apple did a lot right on the software front in 2013 – mostly in the form of iOS 7 on mobile and OSX 10.9 on desktops. And for better or worse, it continued the debatable trend of migrating iOS features to OS X. These changes – Notification Center, Dashboard, iMessage, iBooks, Airdrop, among others – fall into two categories: they either supplant existing third party features (Growl, Google Notifier, or the Kindle app), or supplement your desktop with an app that previously only existed on your phone. The logic from Apple’s point of view is clear:

a. Migrating apps and features means that a user has a seamless visual and interactive experience across devices.

b. The iPhone and iPad were built upon simplicity. And to bring some of the hallmark features of that simplicity back to the desktop will work to simplify the desktop, as well.

c. And if, by chance, the user is moved further into the Apple ecosystem, so be it. For instance, Notification Center provides updates from Facebook, Twitter and LinkedIn. But it does not support fetch notifications from Gmail (like Gmail Notifier does), unless one’s account is synced with Apple’s native – and awful – Mail client.

One is therefore is inclined to compare the feel and functionality of iOS apps, and their desktop counterparts. And for the most part, it’s pretty smooth. iBooks on OS X mirrors the clean functionality of its iOS counterpart. Airdrop is a nice addition that cleanly gives Bluetooth file transfers drag-and-drop simplicity. Notification Center is nice, but I’m not convinced that its worth the extra space on my menu bar. 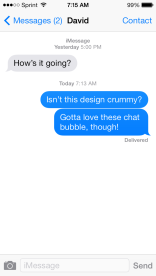 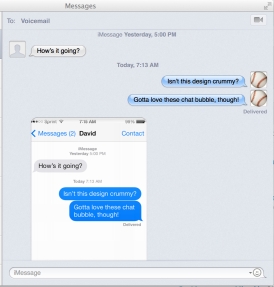 The iOS version has all the hallmarks of last year’s redesign. Clean lines, no gradients, and no skeumorphism. But it’s still buggy and inconsistent.

But iMessage on OS X is pretty awful from a design perspective, in a way that reminds me of my AOL Instant Messenger days in the early-aughts.  The reflective chat bubbles, round-edged pictures, and a dedicated emoji button are all unnecessary ornamentation. They do a disservice to iMessage, and incline the user toward the cleanliness and cross-platform usability of Google Hangouts or Facebook Messenger. I imagine that Apple will get around to addressing iMessage’s awfulness in the next iteration of OS X. But the stagnant design reiterates what Tom Dale wrote two years ago:

Google’s purchase of Nest is another step in that direction. Apple’s specialty has always been the ability to fit technology into one’s lifestyle, and Google’s purchase of this smoke-detector company – writing it out makes it sound absurd – is undoubtedly another attempt to crack that code – to understand the consumer in an algorithmic sense, while seeking to fit into their life on a aesthetic and interactive level.

Apple’s upward migration of the apps in your pocket to the apps on your desk is logical enough, but the discordance between the visual and functional aspects of the two is something that really must be remedied. Let’s hope the message gets delivered.

2 thoughts on “iMessage Not Delivered”