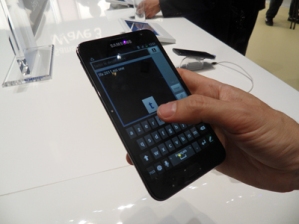 Here at Ben & David, we’re pretty tolerant of most things. We don’t mind if you’re short or tall, Democratic or Republican, fans of Michael Bay films or just people who like movies with substance. However, we have a low tolerance for smartphone foibles, and chief among them, the Android industry’s insistence on using virtually pornographic names for their phones. Samsung, it’s been pointed out, makes great phones – Ben owns a Galaxy SII – but does an awful job naming them. In fact, the company’s greatest coup in 2012 was likely shifting their marketing parlance from”Galaxy S III” to simply “GS3.” Short, sweet, and totally appropriate for children under age 17.

Similarly, the company went overboard with the sheer size of its Galaxy Note II. I work in the tech world, and encounter a wide variety devices on a daily basis. Samsung did a bang-up job on the standard Galaxy S line, as well as a decent showing on the Galaxy Tab. But the Note is just too big. So large, in fact, that when a colleague whips out his Note, I find myself reflexively tempted to saw the device to a holdable size. The Note is, for all its aspirations, the telephonic equivalent of bringing a dinner saucer to a McDonald’s: it’s not intrinsically wrong, and you have the right idea, but it’s simply too big for the job, and likely to attract ketchup stains. Also, it looks stupid. From hereon out, smartphone makers should abide by the waffle yardstick: If the device necessitates a holster the size of a waffle iron, then the product should be redesigned, or at best, traded for waffles.

Apple – which has changed its screen-size philosophy over the last few years – espouses a more harmonic approach to device dimensions. The above commercial is both arrogant and informative. The video takes a given – that your thumb should be able to touch all parts of the screen equally – and make the watcher feel stupid for not articulating or demanding as much. The ad is also representative of Apple’s more balanced and thoughtful approach to smartphone design, and is equally emblematic of Samsung’s use of a “shotgun” method of production. The company crafts a myriad of indistinguishable devices for a variety of consumers, and hopes that they sell.

But, stupid-looking or not, Notes have sold like hotcakes, begging the question; is bigger better, or are people just shameless? Either way, I just might need to write larger articles. Or find a different audience.

2 thoughts on “The Samsung Galaxy Note II is So Big, It’s Stupid”