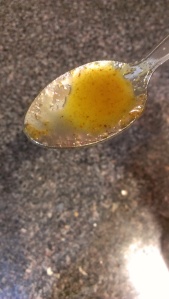 In the last year, I’ve come to love blue agave nectar. It provides a subtle sweetness that’s more liquid-y and less cloying than honey, and serves as a cheaper alternative to maple syrup on waffles and pancakes. And because it’s less viscous than its gooey cousins, the food’s flavor is augmented, rather than dominated, by the agave. In fact, my standard breakfast has become greek yogurt topped with granola and cinnamon, drizzled with agave. I’d also highly recommend using agave as an alternative to honey for marinades or dressing, especially if you prefer your condiments less thick. Below is a recipe that works great as a marinade for grilled vegetables or salmon, and works just as well as a dressing.

Mix and enjoy. I found it especially good spread on on a mix of organic quinoa, with grilled onions and peppers.