Several months ago, I wondered why American Express didn’t offer some sort of tailored “$5 off $25” perk at Uber. After all, Amex is pretty aggressive when it comes to targeted promotions, and actively inks deals with retailers that cater to the tech-friendly and mobile-oriented crowd – the same crew that gets its lifts in Uber. In recent months, Amex has offered deals at iTunes, Dunkin Donuts, J. Crew, and Zappos – all brands that try to tap into the mobile audience. And, as I experienced firsthand, Amex’s app uses geolocation to provide targeted reminders of nearly-redeemed offers.

It therefore came as no surprise that American Express formally joined arms with Uber to give users the opportunity to either pay with points, or earn extra, on all rides in Uber cars. But the marriage isn’t only a partnership based around the idea of “Hey, I’m mobile, you’re mobile, let’s grab drinks!” Critically, the partnership makes sense because Amex and Uber occupy the same space in different markets. When compared to competing credit cards, American Express doesn’t always win out: many other cards offer the same roadside assistance perks (Visa Signature) or more sensible points-back structure (Amazon Visa) or lack foreign exchange fees (CapitalOne). But Amex sits at the intersection of cachet and convenience. An American Express card is a status symbol  – just say the words “Platinum from American Express” – whose cachet almost lies in the fact that many places don’t take it. But it also happens to be reasonably convenient, particularly with things like extended warranties or pre-sale concert tickets. These perks may not necessarily be worth the $65+ per year that an Amex card entails (or $450 per year for the Platinum), but they’re a nice bonus.

Uber occupies the same space, only in the world of transportation for hire. Inasmuch as it’s convenient to summon a cab from your phone, there are other companies – Hailo or Gett – that do same thing more cheaply, and at roughly equal convenience. But Uber isn’t only about the technology; it’s about the cachet that goes with using a slick car service – I Uber-ed to the show downtown – and one that’s at your beck and call of your iPhone, at that.  There is no denying Uber’s profound convenience – or its fun promotional perks – but it’s indicative that it offers the upscale UberBlack, UberSUV and UberFamily above and beyond its more basic offerings. You can almost feel the Amex integration.

I’d write more on the topic, but I have pre-sale tickets to buy. I’ll probably just take a car to the performance.

Update: June 16
Almost on cue, Uber and Bonobos announced a promotion, too. 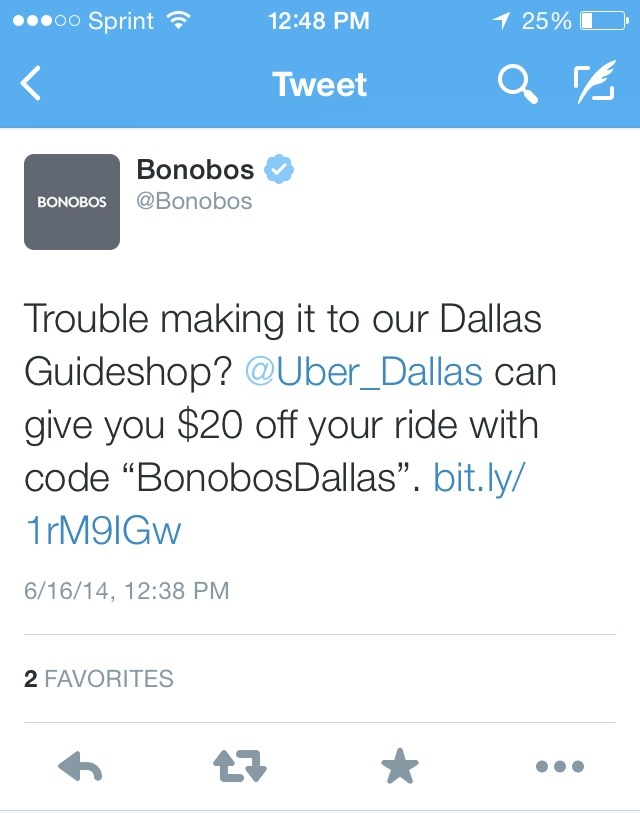 One thought on “Uber ‘n’ Amex: Joined at the Hip Factor”