Last week, I was fortunate enough to get my hands on some Grow and Behold beef bacon.  Oh it was so good that David wouldn’t touch it with a ten foot pole!  I first used it to make bacon and eggs (see the picture below) which were great but a bit too greasy.  Next time I have to use the technique (shown here) of using paper towel to absorb the extra fat in the pan. After my bacon introduction, I went for Chef John’s amazing looking and purposefully misspelled Cajun Chicken Ragu.  It has quite a few steps, but nothing particularly difficult, and it was absolutely fabulous!  The Cajun spices made this a spicy dish, but in a flavorful and balanced way.

For this recipe, I actually spent a bit of time preparing some of the ingredients beforehand and that really saved me from freaking out about burning anything.  After that came frying the cut up pieces of bacon.

Notice all of that oil? All of it is bacon fat, and it is crucial to this recipe adding a certain salty, smokiness that just screams “New Orleans!” (perfect for Mardi Gras season).

After the boring parts (sauteing the vegetables, adding flour, deglazing with chicken soup, adding meats, and simmering) were completed, I spooned it over some fluffy brown rice and topped with those great bacon bits.  Contrary to Chef John’s calculations, this made not 4 but 6-8 servings but don’t worry, it is just as great leftover.  Highly recommended (both the dish and the bacon). 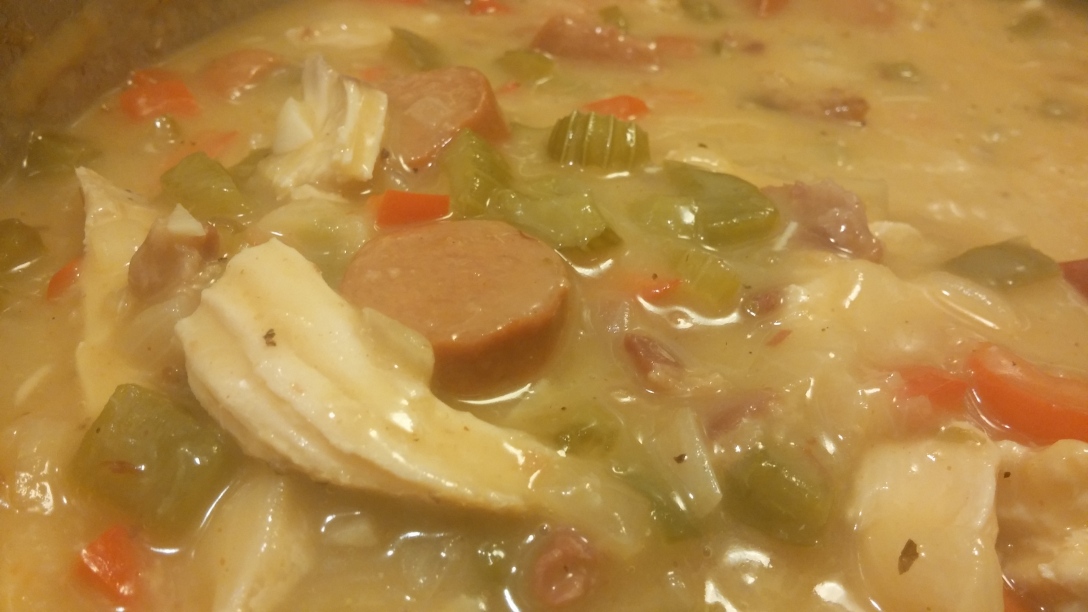 One thought on “Cajun Chicken Ragout (with beef bacon bits!)”