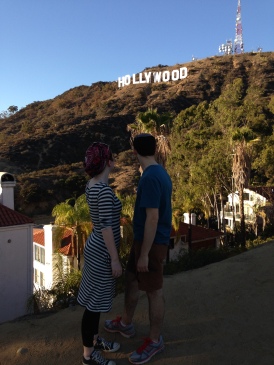 My wife and I recently returned from a jaunt to sunny Los Angeles. We were fortunate enough to be able to do a great deal in a six-day sweep: the Santa Monica Pier, Venice Beach, the Hollywood sign, Getty Villa, Warner Brothers Studios, the Grove, LACMA, La Brea Tar Pits, Hollywood Boulevard and about seven different Coffee Bean and Tea Leafs. We hitched an occasional ride with relatives, but the majority of our travel (including rides to and from our hometown NY airports) were on Uber – the smartphone-based, on-demand car service.

We considered renting a car, but realized that the cost would be equivalent to buying another airline ticket. We assumed that, for a six-day stay, a rental from Hertz would break down like this:

$15…taxes and other fees

Using Uber ended up costing us $190, virtually half of what we would have otherwise spent. A few tricks we learned along the way:

1. It pays to share: I “referred” my wife to Uber; she netted a $20 signup credit, and I got a $20 referral bonus. We then split our first Uber ride with a third person. This made our initial trip from Manhattan to LaGuardia free – in fact, we technically made money. The sharing feature could be improved if it allowed you to split a ride with strangers around you who have Uber, and who have input destinations near your own (see #2, for more).

2. Uber is good with pickups, but needs work on drop-offs: Uber operates around seamlessness. From the minute you summon your car, you have your driver’s name and contact info. Cash and tips don’t exchange hands, and receipts are all emailed. However, one kink in the system is that using the Fare Quote feature to approximate trip cost does not actually tell the driver your ultimate destination. Therefore, upon entering the car, you must still wait for the driver to input the destination into an often-clunky car-based GPS. I understand that Uber doesn’t want to lock you into a fixed destination when you summon a car – a consideration for boozed-partygoer pickups, I imagine – but a “probable destination” option would be a useful feature for those of us who won’t change their minds between hitting “set pickup location” and stepping into the Camry. Plus, some drivers begin charging for the ride before inputting the location – effectively charging for time spent typing an address into a GPS.

3. Surge pricing is a bummer, but is a great lesson in supply-side economics: My wife and I were frustrated when trying to Uber from Wilshire Boulevard to Graumann’s Chinese Theater; we saw that the service’s much-maligned surge pricing was in effect, and that our ride would cost 2-3x more than normal. We ended up using the time to walk closer to our destination, all the while watching how the supply of Uber drivers on the road increased to meet demand. That said, surge pricing is an entirely understandable practice, and is exercised by every industry – Uber is just the only one to tell you when they do it. It’s not fun, but at least I know what I’m paying.

4. As with all cab services, the cost of using Uber varies greatly from city to city: Of the $190 we spent on transportation, $70 went to the carfare from JFK back to Manhattan. At the end of the day, the rates in LA – as well as the other cities where Uber recently slashed prices – are considerably lower than in New York. A ride on UberX (the most basic option) costs $3/mile in NY; in LA, it’s $1.25/mile.

Ultimately, Uber sits at the intersection of convenience and cost. It’s never as fast as having a rental car, and it’s never as cheap as taking public transportation. But, generally, it’s cheaper than renting a car, and faster than taking the bus. That dynamic – combined with enticing referral discounts, the ability to track one’s car approaching your pickup location, driver ratings, and overall smartphone control – makes Uber a very compelling option for many vacations.

PS: Use my referral link and get $20 toward you first ride in January!

PPS: The downside of not having a car is that you can’t charge your battery-chewing iPhone on the go. I use a Brookstone 2600mAh as a backup, although I’m eyeing a Bushnell SolarWrap if I ever go off the grid.

3 thoughts on “Out and About in LA”